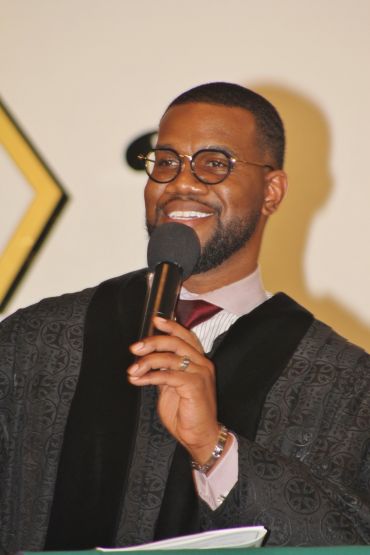 The Reverend Doctor Christopher Paul Burnett, or as he is lovingly known as “Pastor Chris,” was born in Charlotte, N. C. where he cherishes some of his fondest and earliest childhood memories. Later his family relocated to Columbia, S.C. and eventually to Atlanta, GA, where he continued to grow and excel academically and in the things of Christ.

He earned his B.S. Degree in Microbiology with a Minor in Kinesiology from Penn State University, where he became a proud member of Kappa Alpha Psi Fraternity, Inc. Pastor Chris’ zeal to excel in the call that God placed on his life to serve God and His people in a greater way, motivated him to earn a Master of Divinity Degree from Turner Theological Seminary, a constituent of the Interdenominational Theological Center in Atlanta, GA. And recently, after three years of hard work and dedication, he was awarded the Doctor of Ministry Degree from Candler School of Theology at Emory University in Atlanta, GA.

In his unwavering obedience to the call of God, Pastor Chris left his pursuit of medical school to answer God's call on his life which has offered him the opportunity to serve God’s people in some awesome places.  His journey began as the Youth Pastor at Trinity A.M.E. Church in Atlanta, GA under the leadership of Reverend Dr. Jeffery B. Cooper (General Secretary & C.I.O. of the AMEC). He has pastored 4 great churches, including eight transformative years of pastoring in Alabama, and is now the proud Pastor of St. Stephens A.M.E. Church, Essex, MD.  These stops on his journey have continued to foster a yearning to be a great shepherd. While building ministry enterprises that transform and prepare God's people for their God-given destiny, through practical teachings, prayer, and guidance, he has and will continue to impact the lives of those who seek to know God and themselves in a greater way. Setting an exemplary standard for the people of God, it is his desire to “Grow…’Til … God … is Pleased.”

Pastor Chris’ passion and gifts shine brightest when operating in his creativity and his ability to bring ideas to reality. He is an author, a playwright, film producer, a national conference presenter in the area of calling and purpose.

Pastor Chris is married to the lovely, former Damarys Davis, an educator in the Baltimore County Public School System. He is also the proud father of two Baron Christopher Valentino and Noel Olivia Gabriella. Together, they seek to fulfill God’s commission on their lives to be the burning bush that points people to their ultimate destiny, calling, and fulfillment.