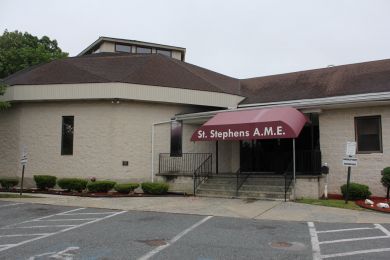 St. Stephens African Methodist Episcopal Church was founded in the early 1870’s when a group of dedicated Christian souls cleared a spot in the woods and set up a meeting house in the area known today as Middle River. St. Stephens is one of the landmarks in the Essex area, located on Old Eastern Avenue, across from Josenhans Corner and Back River Neck Road. It is the oldest church in Essex.  For over a century, it has been the pride of the community and stands proud of its heritage.

In 1878, the original group, along with others who had joined them, purchased the land at the present site and erected themselves a formal house of worship.  The first Church was a log building, logs being at the time a common material of construction.  The founding fathers of this church were the following brothers and sisters: George Howe, Charles Dutton, Daniel E. Camper, John H. Smith, Charles Hamilton, Charles Hawkins, Exeter Smith, John W. Smith, Daniel Evans, Charles Randall, George Young, Rev. and Mrs. Basil Brown, Rev. And Mrs. Washington Brown, and Bro. Lewis Price.

Rev. Charles Young, an African Methodist Episcopal Minister, invited the worshipers to join the African Methodist Episcopal Church Conference and became the first pastor of the newly organized A.M.E. Church.  At one time, St. Stephens was on a circuit with Shiloh AME Church; the pastor serving Shiloh in the morning and St. Stephens in the afternoon.  Morning services at St. Stephens were conducted by Rev. Basil Brown and his brother Rev. Washington Brown.

Eventually, St. Stephens was made a station.  Rev. James A. Briscoe, who pastored the circuit, then became a full-time pastor.  In 1907, under the pastoral leadership of Rev. Briscoe, the log building was replaced by a second more modern structure.  The congregation entered the new church debt free.  A parsonage was built in 1918 during the pastorate of Rev. P. O. Bundick. This second church served as a house of worship until the 1960’s. Later, under the leadership of Rev. Olen Molock, the construction of a church hall began.  It was completed under the administration of Rev. M. B. Simpson.

Rev. Reginald Boston and the St. Stephens congregation made plans for a third church.  In 1966, Rev. Richard P. Hall, built and paid for the third church which was dedicated in August 1972, and became mortgage free on December 12, 1976.  Under the pastorate of Rev. Oscar R. Christmas, the church purchased land formerly used as a cab dispatch office.

Under the pastorate of Pastor William A. Gray, III, St. Stephens adopted as its second name in 1986, "A Center for Living Faith."  In 1987, 1.56 acres of land was purchased and used as the church parking lot. God made this provision as He prepared St. Stephens for its significant membership growth from 200 to more than 1,700 members.  God also blessed the ministry with the creation of The Creative Learning Center (a daycare center) which was founded by First Lady at that time, Reverend Candace Gray in 1990.   The blessings continued with the building of a 17,000 square foot church facility with construction starting in 1994 to meet the needs of its growing congregation and ministries. St. Stephens dedicated its new Living Faith Center in 1996.  Blessings continued to abound and God enabled St. Stephens to purchase a 12,000 square foot building for its Creative Learning Center, Christian Academy, and other ministries. The St. Stephens Christian Academy, which provides high-quality education for Kindergarten through 3rd grade, was founded and opened its doors in 2004.  After a total renovation of the facility, the building was dedicated in October 2007.

In July 2008, God showed favor and again blessed St. Stephens, this time with an additional fully paved and lined $80,000 parking lot that is completely paid for as well as a wrought iron fence to protect the church’s graveyard from walk-by traffic.  During this time, St. Stephens participated in the multi-million dollar neighborhood development resulting in the building of the Renaissance community that changed a crime-infested community next door to the church into a community that contains senior apartments, mixed-income single family homes, townhomes, and an open space park.

In 2017, The Reverend Doctor Christopher Paul Burnett was appointed to lead the congregation into its next chapter. Pastor Chris, as he is lovingly called, desires to pick up the mantle that has been so elegantly put before him to continue to develop St. Stephens African Methodist Episcopal Church. By developing and equipping individuals to use their talents to the glory of God, Pastor Chris envisions St. Stephens GROWING TIL … God is pleased.

We are truly a church with three ships: Fellowship, Worship, and Discipleship. The captain of all three ships is the Holy Spirit who is allowed and asked to move freely and frequently. Come join us as we enter into our next chapter at St. Stephens. We’re looking forward to many more years of service to our current and surrounding communities.